There are few locations to get married in Ohio as majestic as Stan Hwyet, a sprawling estate built in the gilded age of the early 1910s.  This is where Britney and Gregg said their “I do’s.”  Britney and Gregg have a fun connection with us going back to the beginning of our videography.  Britney was a bridesmaid in one of our early weddings.  What a privilege to capture her day many years later. Despite the never-ceasing rain that day, Britney and Gregg just rolled with it and we got some of our favorite shots of the season.  We were constantly impressed with their willingness to rough it in the drizzle.  Along with their wonderful photographer Addison Jones, we toured up and down the grounds finding more and more lovely spots to capture Britney and Gregg’s first day as husband and wife.  Our favorite of them all was their first look, held in an enclosed garden, with a rectangular pool in the center.  As the water rippled with the rain, Britney and Gregg’s reflection on the water beautifully captured their first sight of each other that day.  Many sweet blessings to  you both, Britney and Gregg!

Vendors we had the privilege to work with:

Laura and Angelo just enjoyed each other.  You could see it the whole day.  We knew Laura as a student many years ago in high school and were delighted to meet Angelo.  At their ceremony, they did something unique that represented what they hold most dear, even above each other.  They took three strands of rope and wove them together in the shape of a cross to symbolize their union with each other and Jesus.  With moments of both devotion and laughter they committed their lives to each other.  With some fun stops at the Cleveland Art Museum and the Cleveland sign framed by downtown, we headed to they stylish Acacia where Angelo’s aunt heads the catering.  We can honestly say we have never seen a larger dessert table!  It was a beautiful location and beautiful evening.  We especially loved getting time with Laura and Angelo in the sprawling fields behind the hall.  May rich blessings follow you all the days of your life together, Laura and Angelo!

Venders we had the privilege to work with:

Hillary and Geoff are filled with fun! And that fun was all over their wedding day from the animal themed cake to the dragon’s breath popcorn. It was a delight to see them bask in each other’s love throughout the whole day, even despite the chilly weather Cleveland gave them. Gratefully, we spent most of their lovely day in the historic 1890 Cleveland Arcade with its stunning architecture. The night was topped off with a surprise for Hillary and Geoff: a horse and carriage ride! That was a first for us! As they rode off into the night their loved ones cheered and wished them well. Many blessings on your marriage, Hillary and Geoff!

Vendors we had the privilege to work with:

A wedding in a small country church next to a gentle stream. That is where Victoria and Scott tied the know-literally: the pastor actually tied a knot of cloth around their hands to solemnize their union. After a visit to the picturesque home they are building in the hills, the couple celebrated with family and friends at the stone constructed Kirtland Country Club. A violinist, a live band, a live painter, macaroons, and a lot of fun filled the rest of a sweet, touching day. Congratulations, Victoria and Scott!

An early peek at Victoria and Scott’s wedding day

A few fun clips of Victoria and Scott’s lovely day!

A Little “For Real” Love! 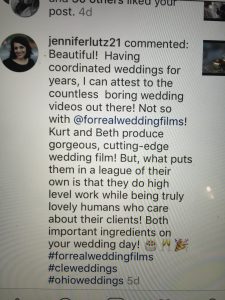 Fun!  Serious fun!  That was the word of the day at Heather and Tim’s wedding in September.  The day started out at Heather’s aunt and uncle’s home at One Miranova Place.  Her aunt, an interior decorator, and her uncle have a stunning apartment overlooking downtown Columbus.  After catching Heather and her bridesmaids having fun downstairs (including a spontaneous dance session on the couches!) we went up to get shots of Heather in her gorgeous dress with the amazing backdrop of the city.  Her first look with her dad and brothers was full of tears and sweetness.  Back downstairs we had fun getting clips of the groomsmen with Tim.

Off we went to the church where, not only would Tim and Heather marry, but Heather’s parents also married years ago.  Marked by solos, a string quartet, and a truly meaningful sermon, Heather and Tim gave their hearts and lives to one another before family, friends, and God.

From there it was off to the reception at the Pinnacle Golf Club.  The reception was led by the Sly Band, the most energetic wedding band we can recall!  I don’t remember the number exactly, but they must have had around 10 members in this group!  The wedding party all came in in one fell swoop, followed by Tim and Heather with one of the most exuberant entrances!  They headed right into three tunes to get everyone out on the dance floor right away!  From there it was time for toasts.  After the heartfelt and fun toasts and dinner, the band lit up the dance floor!  The night was punctuated with a confetti toss, glow sticks, and some serious celebrating!  Heather and Tim rounded out the night with a sparkler exit.  Many, many blessings to you, Heather and Tim, and on your marriage!!!

The above photo thumbnail is courtesy of Kismet Visuals

Produced by Kurt and Beth at For Real Wedding Films
forrealweddingfilms@gmail.com
440-225-1868

Here are some of the wonderful vendors we had the privilege to work alongside:

It’s not often that a teacher gets to have a student in class at age 14 and then gets to be at their wedding years later.  But that’s what I had the privilege of doing!  Sarah was one of my freshmen English students years ago, but on this day she was the beautiful bride.

We started off the day in our neck of the woods, Berea, where Sarah and her bridesmaids were getting hair and makeup done at the Front and Center Salon.  Then we were off to Sarah’s house where we had fun playing with the sunlight as it shined through a tree where we had hung her stunning dress.  After catching some fun pics with Sarah, her bridesmaids, and Sarah and Ryan’s dog, we headed into the house for her to put on her wedding dress.  It was such a fun sight to see her come down the steps with all her dear friends delighting in seeing her in her dress for the first time.

Before the ceremony we headed to Miller’s Nature Preserve where, amongst the colorful late summer flowers, Sarah and Ryan had their first look, followed by lots of fun bridal party shots, including one with all the guys holding hockey sticks!  Everyone of the groomsmen was a hockey player it seemed!

The ceremony was at Sarah’s home congregation, St. Paul Lutheran Church.  Her bridesmaids walked down the aisle to a solo by another former high school teacher.  While we have once before seen a cord tying ceremony, we have never seen one where the cords, after being entwined, create a cross, symbolizing the union of husband, wife, and God.  It was beautiful.

After a quick swing downtown to catch some clips with a gorgeous sunlit Lake Erie in the background, we cruised on over to Tom’s Country Place where Sarah and Ryan danced, laughed, and partied the night away!  A humorous detail was that Sarah’s bouquet toss had such a great arc that it hit the ceiling and ricocheted to the floor before reaching all the single ladies!  🙂  We pray so many blessings on you, Sarah and Ryan, and on your marriage.

Here are some of the wonderful vendors we had the privilege to work with:

The Union Club wedding of Mackenzie and Bob

One thing we’ve loved about filming weddings is that it has helped us experience our city more. Mackenzie and Bob’s wedding was immersed in the grandeur of the city of Cleveland.  We started off at the trendy Kimpton Schofield hotel where Mackenzie and her bridesmaids were getting ready in a beautiful room looking out towards Playhouse Square.  We had a fun time asking the hotel staff if it was okay to hang her dress from a chandelier for a cool shot!  They graciously agreed.:) We were delighted to see our friends Suzanne and Dan from Suzaran Photography.  We love working alongside them!  With a little time to spare we jaunted over to the Union Club where Bob and his guys were doing some serious chillin’ and laughing!  Then we headed back to capture Mackenzie in her dress.  It was a lovely sight to see her dad get his first look at his daughter in her wedding gown.

Then it was time to head off to the Cathedral of St. John the Evangelist.  Talk about grand!  It was a glorious setting for a sacred ceremony.  We loved Bob’s adoring glances at Mackenzie during their vows.  We also enjoyed capturing the architecture of the cathedral as it framed them in this holy moment.

After the ceremony we headed out to Cultural Gardens where we stopped at the Hungarian gardens for some beautiful shots of Mackenzie and Bob and their wedding party in the beautiful foliage and stonework.  The late afternoon sun was peering through the trees in glorious fashion.

Finally, it was time to head to the Union Club, a location that we adore.  This early 20th century building has more charm than a dozen modern building put together.  The most stunning aspect is that they lined the grand staircase with candles on both sides from top to bottom.  The video we shot of Mackenzie and Bob on the staircase is some of our favorite footage.  Up in the ballroom, they, their family, and their guests filled the night with toasts, laughter, tears, and lots of dancing.  It was a beautiful night with a beautiful couple.  Many sweet blessings on both of you and your marriage, Mackenzie and Bob!

Mackenzie and Bob’s wedding film from For Real Wedding Films on Vimeo.

Video thumbnail above courtesy of our friends at Suzaran Photography

Here are some of the great vendors we had the privilege of working with:

Photography: Our friends Suzanne and Dan from Suzaran Photography